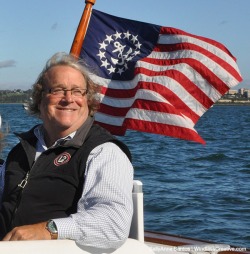 One of Commodore Gubelmann’s first impressive sailing credits came as a member of St. George’s undefeated 1964-5 varsity sailing team. It was there that he met future life-long friends and teammates racing Fireflies. Fast forward 43 years– together with some of these same mates, he claimed two 12mR World Championships as well as numerous North American and International titles with their Courageous (US-26) Syndicate.

Meanwhile in 1964, Jimmy’s father Walter Gubelmann was the syndicate-head for the Olin Stephens designed 12mR Constellation (US-20) — a hopeful at NYYC’s Defender Trails for the America’s Cup that summer. Jimmy’s 50+ year passion for 12mR racing started aboard Nereus (US-14) (now named Northern Light), Constellation’s trail horse where he was a full-time crew member and alternate for US-20.

Later that year he attended the University of the South, followed by service in the US Navy as an Electronics Engineer and later graduated from the Parsons School of Design with a degree in architecture. On July 4, 1976 he founded Windigo Design, where his architectural career spanned thirty-five years.  Among his favorite design projects was a collaboration with naval architect David Pedrick on the trompe l’oeil (eye-fooling) waterline graphics applied to Defender (US-33) for the 1983 America’s Cup Defender Trials.

Jimmy’s very long-list of 12mR accomplishments include victories on many of the 12s including Weatherly (US-17) at the 1998 Save the Bay Regatta with team mates Charles Dana and Ralph Isham. In 1999, he formed the Columbia (US-16) Syndicate that placed 3rd overall at the 12mR Worlds held at the 2001 America’s Cup Jubilee in Cowes. The same team went on to win that season’s Prada Challenge and Grimaldi Trophy for a series of regattas held throughout the Med. The Courageous (US-26) Syndicate he formed with Criag Millard in 2002 and headed through 2012 added significantly to his trophy collection with wins at the 2005 and 2007 12mR Worlds, multiple North American Championships and too many more to list both in the US and the Med.

In 2013, Jimmy was asked by ITMA officers to take-on the leadership and revitalize the then- dormant 12 Metre Yacht Club. In his first official role as 12MYC Commodore, he attended the 2014 12mR World Championship at Barcelona where he was inspired to host the next 12mR Worlds at Newport. Here began a 5 -year mission, that with his stewardship resulted in many 12s returning to the water and several seasons of exciting 12mR racing that culminated with the spectacular 2019 World Championship at Newport featuring 22 12mR teams from around the world.